A few months ago I got mugged and went through a bad experience with the Gurgaon Police. Looking at the way the Delhi police behaved today with the protesters, I was forced to think about the way I was treated.

The incident happened on April 12 and is documented on by my friend who was with me then.

I often document my life using Ohlife. Here are some snippets from what I wrote during those days:

Went to the Police Station with Ankur again today. Ankur has some good contacts, he took some names and the police changed their tone as soon as that happened. Sad to see the state of affairs at Police Stations. They threaten the victim, really badly. Even though Ankur was talking to them, my legs were shaking. Yes, of course I was not at fault but the way they were talking……
They asked me to prove that I was being assaulted
They asked to tell them who the assaulters were? Yeah, as if i knew who they were. I’ve never heard a more dumb question in the recent times!
No wonder we’ve lost faith in the Police of our country and the whole system in fact

Went to the police station again with Ankur today. While one constable agreed to note down the application, when we went to a room to get it noted, another one sleeping woke up and behaved in a miserable manner.
He snatched the paper and said no complaint would be noted. Started shouting and asking stupid questions. He said: ‘naam batao jisne ye kiya?‘ Obviously i didn’t know the names: “Agar tum jaaante hi nahi kisne kiya to hum kahan se dhund k laenge” – which to me was the most stupid statement a policeman can make! “Uth yahan se aur bahar nikal“. Yes, the way he spoke, meri literally fat gayi. Thanks to Ankur, who just kept sitting, i got enough strength, even i stayed put in my chair. Finally after a lot of his shouting Ankur also said that ‘aapko complain note karna padega nahi to hum dharna denge‘. This put the nail in the coffin and he just shouted for us to leave. He even said “jo karna hai karle, nahi likhenge complain”. Ankur started to argue but i pulled him out.

Then he called up someone and finally someone spoke to the head constable (Manoj Kumar). Sad to see how people change after they hear a few big names. Its not about VIPs being important, its because how these assholes govt employees change – that the VIPs have become VIPs.

Finally an application was noted but no receiving was given. I don’t have a proof that i’ve submitted the application. Yes, i’d be happy to get my phone back, obviously, but i still i don’t have enough faith in the Indian police. Lets see. Faith and hope are mismatching here!

Another unproductive day in terms of work. Dont know whats happening… there’s no concentration. The focus seems to have been lost somewhere.

In the meantime one of my friend tried to find a way out to get the police file a report:

@dhirajpandey yes email to police commissioner and then follow it up. Its on record. Keep a print out of it.

So I did what she said.

Notice the mail date and the date below, when some action was taken.

Got a call from the police station and was asked to come down. On reaching there:
Constable: Aap yahan kisko jaante hain?
Me: [puzzled] ?? Kisi ko nahi, matlab??
Constable: Nahi kisi ko to jaante hi hain, matlab minister/MLA wagarah ko?
Me: Nahi to.
Constable: To DCP wagarah kisi ko?
Me: Nahi, but hua kya?

Was surprised to find out that they had a copy of the mail that I wrote to the DCP and Commissioner of Gurgaon Police. And since it had to come with all signs/stamps and probably with a “daant” from their DCP, they wanted to take action on it.
Well, that’s the good part, the sad part is that they said I could do 2 things:
(a) Either be stiff and ask them to act on the complaint. Go the formal way, lodge an FIR and ask them to act on it
(b) Or be friends with them, ‘bhaichara’ in their language. Which meant they’d be helpful and work in an informal way
Obviously, they wanted my support and not complain against them. Not sure if I did the right thing but that’s what i felt at that moment. Yes, my heart ruled over my brain and I saved their ass!

Today (Dec 23, 2012): This is something that I regret now! I wish I would have complained against them. No, I did not know any media personality who could help me then. I got in touch with some Star News guy 3 days later but all he said was “ab to 3 din ho gye hain, matter purana ho gya so kuch nahi ho sakta” – yeah! While I was still in trauma, for the 24×7 media guys it was too old a matter!

Got the shocking news of Raj ‘OldMonk’ Mathur passing away couple of nights back. Was speechless when I first heard it. The news first reached twitter and then I went to check whether it was actually true. Couldn’t believe my eyes. What’s worse is it actually took me a few seconds to believe it was him when I saw his body at his funeral.

The next few hours I just spent time looking for his mails, digging out my old blogs, where i’d talked about him and reading them. In the process, I came across some pics too which made me nostalgic. Even though I never really got close to him, I was always trying to learn from him from a distance. His to the point conversations. His brutally honest statements. His humour. His love for food and booze. The amount of passion that he had for his work. Rarely would you find such people.

Thanks to @gmishra for introducing me to him as what followed after my first meeting with him and the Open Source world has governed a lot of my mind and life, till date. Yes, despite not being a coder anymore, I still use a Linux machine and go about promoting the FOSS philosophy wherever I go and will always do. Incidentally, it was @gmishra himself who broke the sad news to me!

Thanks Raj sir, may your soul rest in peace. 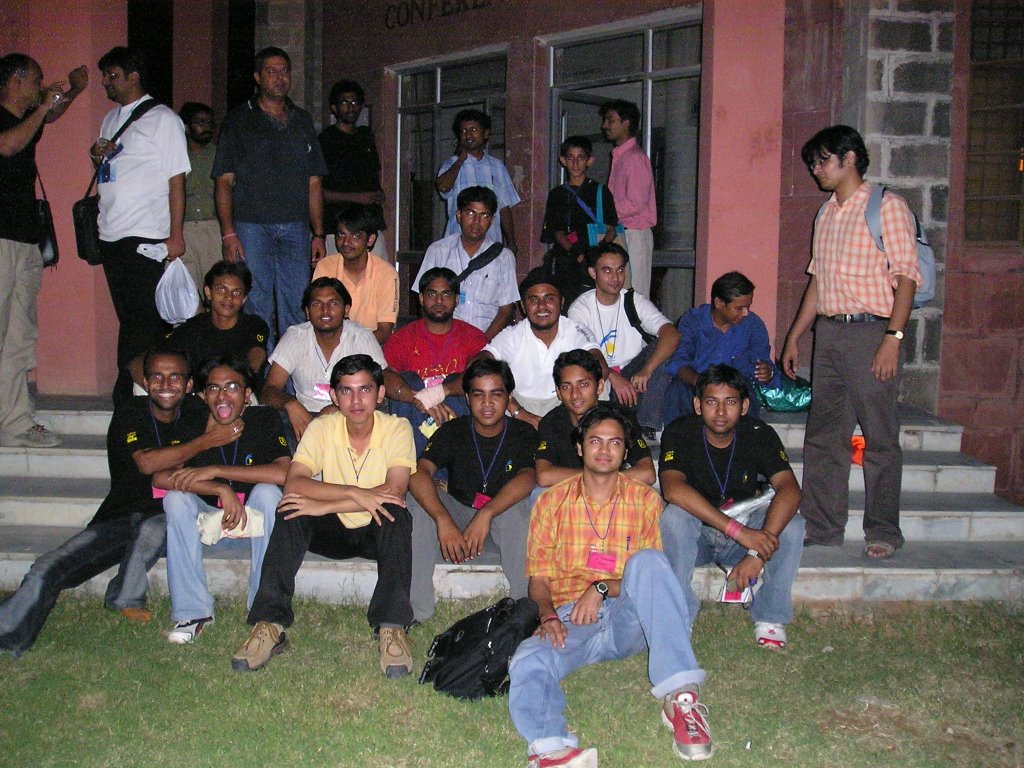